Wolves Basketball is pleased to announce our First ever Volunteer Scholarship.   If you are a graduating HS Senior please fill out the form and email it to info@wolvesbasketballacademy.com

Wolves Basketball is so happy to thank Jacob Hafer for deciding to raise money for his Bar Mitzvah project to create the Jacob Hafer Scholarship Fund!!! This fund is for families who need financial assistance to participate in our program. So proud of Jacob for choosing a cause that is so meaningful to him. 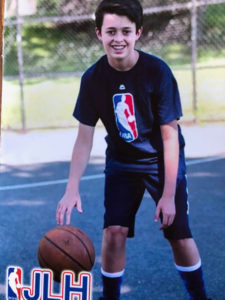 Weston Fisher is in 11th grader at Scotch Plains-Fanwood high school. He is a multi-sport athlete and quarterback of the Scotch Plains Fanwood raiders. He is a member of the National Honor Society and has been volunteering his time for wolves basketball Academy for the past four years.

Adam has been involved with Wolves Basketball from the first clinic, ever since he was in the eight grade. After assisting with the drills and games, oftentimes

with the younger participants, for the first couple of years, Adam became a coach and runs his own station. Wolves was easily Adam’s favorite and most rewarding activity throughout his high school years. Adam’s favorite part about Wolves is witnessing the growth of the participants not only in their basketball skills, but in their social skills, their listening skills, and in their motor skills. Adam is a freshman at Lehigh University majoring in Finance. While Adam cannot attend the clinics weekly anymore because he is in college, he loves coming home to Wolves Basketball.

organized a range of sports year round including Flag Football, bowling, basketball, and Cheerleading. “I am so excited to start this new chapter with the Wolves Basketball Team”

After becoming a mother myself, I developed a deep passion for working with children and making sure that each and every family I treat is cared for in the way

I would want to be treated! My favorite area of practice is sensory integration and I am continually fascinated by what can be achieved with this treatment strategy.”

Practicing occupational therapy for over 14 years, Laura is a certified sensory integration therapist and worked in numerous settings including hospitals, school systems, home care, and private clinics before joining CommuniKids in 2007.

Laura holds a master’s degree in Occupational Therapy from New York University as well as a bachelor’s degree in psychology from Hartwick College. Practicing occupational therapy for over 14 years, Laura is a certified sensory integration therapist and worked in numerous settings including hospitals, school systems, home care, and private clinics.

Adam wanted to be involved from the very beginning of Wolves Basketball. He was a great greeter the first 2 years. The children loved seeing his smiling face when they checked in and received their name tag. As Adam got older he became a great coach as well as assisting in social media. Adam is a graduate of Cornell University with a degree in Hotel Management with a minor in Real Estate. When Adam is home he LOVES helping out at Wolves Basketball clinics.

When Brett shadowed a special needs boy at the JCC’s basketball program in 2013, he had no idea that his experience would be the inspiration to Wolves Basketball Academy. Brett has been an integral part of Wolves from the start. He has done everything from coach, shadow and social media. Brett is a graduate of Ithaca College with a degree in TV/Radio. Brett loves when he is home so he can help out at the clinics. Brett currently runs all of Wolves Basketball’s social media.

Karen is the first smiling face everyone sees when they enter wolves basketball. She makes sure every smiling face has a name tag, is registered and ready for a great experience. She loves working at Wolves. Wolves would not run so smoothly if it wasn’t for her.

Coach Jen has been around basketball most of her life. A 1984 graduate of Plainfield High School, she played varsity basketball which included four Union County championships and three

Group IV final appearances. She continued playing basketball at Pace University where she holds the record for scoring and rebounding as well as being a 2x Kodak All-American. With coaching experience at every level, she has had the greatest satisfaction working with the players of the Wolves Academy. She currently works at Nettingham Middle School in Scotch Plains as a Special Education teacher. Her daughter Morgan helps out with the program when she’s available. She’s headed to Pace University in the fall on a basketball scholarship.

Seth Seiden is a senior at Westfield High School. He played basketball for many years before transitioning to golf. Seth has been involved with helping special needs athletes ever since his bar mitzvah project. Each session he loves seeing the athletes progress at all aspects of the game. He has worked with wolves for the past five years.

Coach Teddy attended Scotch Plains-Fanwood High School where he had a stellar varsity basketball career his junior and senior years. He helps out at strive basketball camp, and excel basketball camp during the summer. He enjoys coaching at the Wolves Basketball Academy because he is able to share his knowledge of basketball with all the kids.